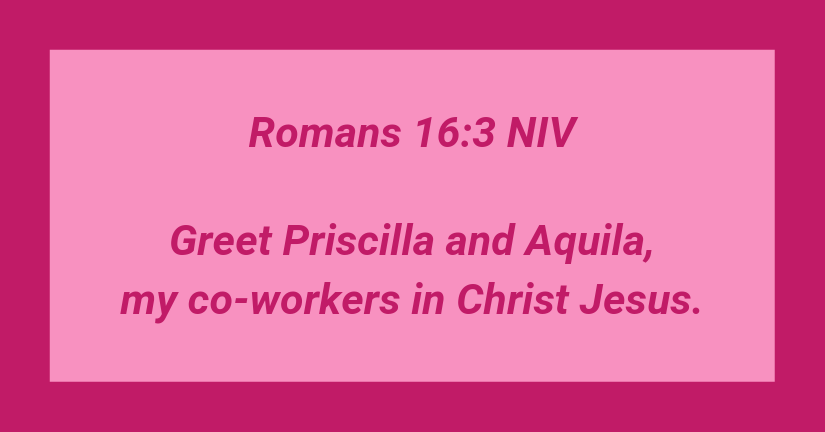 3 Greet Priscilla and Aquila, my co-workers in Christ Jesus. 4 They
risked their lives for me. Not only I but all the churches of the
Gentiles are grateful to them.

“Priscilla and Aquila were a married couple who had become Paul’s close friends. They, along with all other Jews, had been expelled from Rome by the emperor (Acts 18:2, 3) and had moved to Corinth. There they met Paul and invited him to live with them. They were Christians before they met Paul, and probably told him much about the Roman church. Like Paul, Priscilla and Aquila were missionaries. They helped believers in Ephesus (Acts 18:18-28), in Rome when they were allowed to return, and again at Ephesus (2 Timothy 4:19).” (Life Application Study Bible 1904)

“Priscilla and Aquila ministered effectively behind the scenes. Their tools were hospitality, friendship, and person-to-person teaching. They were not public speakers, but private evangelists. For some of the Romans, their home was used for church meetings (16:5). Priscilla and Aquila challenge us with what a couple can do together to serve Christ. Do we regard our families and homes as gifts through which God can accomplish his work? How might God want to use your home and family to serve him?” (Life Application Study Bible 1904)